Hexagram 60 Fear of one’s own power

I Ching. Hexagram 60 is named 節 (jié), “Articulating”.
Other variations include “limits and connections”, “limitation”, “measuring” and “moderation”. 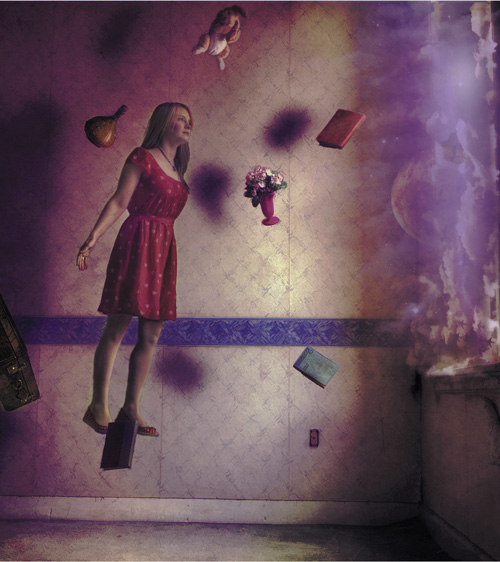 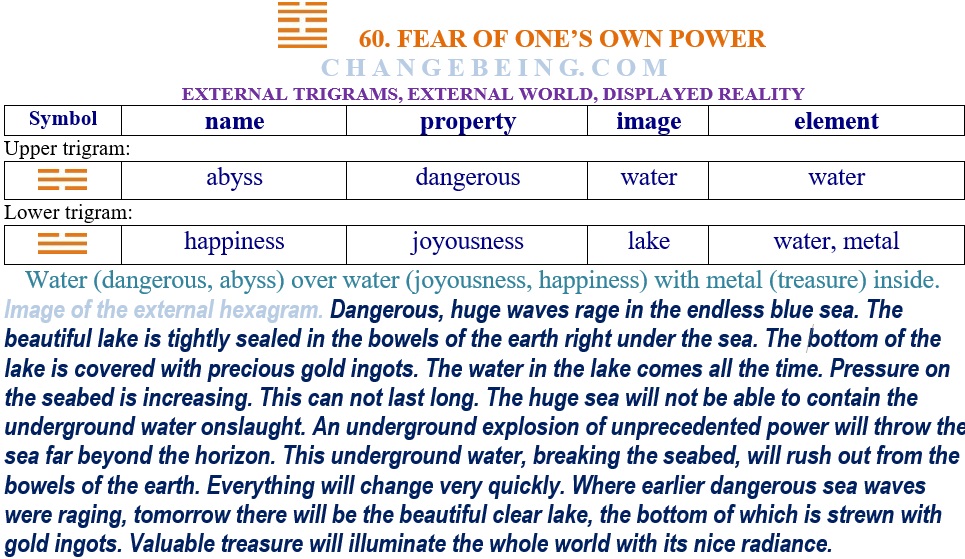 IN THE MANIFESTED REALITY.
Dangerous, huge waves rage in the endless blue sea. Many dangers now exist in the manifested life.
A beautiful lake is tightly sealed in the bowels of the earth right under the sea. The bottom of the lake is covered with precious gold ingots. The solution to the problem, bearing very valuable gifts, is deeply sealed on the inner plane.
The water in the lake comes all the time. Pressure on the seabed is increasing. Something very powerful from the inner plan is breaking out to solve problems and dangerous situations.
This can not last long. The huge sea will not be able to contain the underground water onslaught. The increasing inner strength will overcome all obstacles and dangers.
An underground explosion of unprecedented power will throw the sea far beyond the horizon. This underground water, breaking the seabed, will rush out from the bowels of the earth. Very sharply and powerfully, the internal force will sweep away all obstacles in its path and manifest itself in the world of events.
Everything will change very quickly. Where earlier dangerous sea waves were raging, tomorrow there will be the beautiful clear lake, the bottom of which is strewn with gold ingots. Everything will change drastically. Dangerous situations and difficult problems will be resolved frighteningly quickly.
Valuable treasure will illuminate the whole world with its nice radiance. A very valuable treasure of powerful inner strength will be gained. This will change the manifested reality and bring great joy.

ON SUBCONSCIOUS PLANE.
A little seed has sprouted in the very heart of the mountain. In the depths of the subconscious wake up inner strength.
The tree grows by feeding on the earth. But the path to the light, to the sky, is blocked by the unshakable mountain. Changes in the subconscious are gaining momentum, based on real facts. Unshakable bulk of generally accepted, well-established attitudes prevents the growth of internal strength.
The tree, like thunder, sprouts through the obstacle to the surface. Inner power is very quickly, sweeping away all obstacles in its path, begins to manifest itself in the world of events.
Soon the mountain will disappear under the powerful crown of the tree. Finding inner strength in a fundamental way, beyond recognition, will transform the subtle world.

COMMON INTERPRETATION OF THE HEXAGRAM №60

IN THE MANIFESTED REALITY.  Life is now filled with a variety of events, many of which represent a great danger. Dangers awaken inner potential power. The concentration of internal forces reaches such unprecedented power that it explosively resolves all dangerous situations, eliminates all obstacles. There will come joyful accomplishments obtained by unleashing your own inner potential. A valuable treasure of gold is a manifestation of YOUR OWN POWER.

On a subconscious level. The habitual, well-established picture of the world will crack under the onslaught of force that has come from the depths of the subconscious. The manifestation of YOUR OWN POWER will forever destroy the usual model of the world ON SUBCONSCIOUS PLANE. “Is I the reason for the sudden resolution of all these dangerous problems? Wow?!” How can you not be afraid of yourself! This is the FEAR of YOUR OWN POWER! Calm, unshakable stay (mountain properties) will be supplanted by passions, excitement, and emotions (wood properties).

It is hard for a person to believe that he is the cause of such significant events (a dangerous sea is thrown over the horizon). Bustling and emotions in the subconscious (the properties of the wood) – is an escape from the source of internal strength. Unbelief in oneself over time will destroy the precious gold bars of the inner power manifested here.

UNITY WITH THE SUPREME SELF 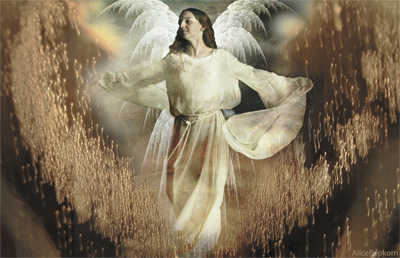 Fear of one’s own power

So quiet it is inside, that every thought comes true immediately and can’t be mastered anymore! How frightening!

Here is a good parable (Swami Muktibodhananda Swami Satyananda Saraswati “The Hatha Yoga Pradipika”):
One yogi went to the jungle to practice self-improvement. After some time, he reached the level of the opening of the chakra of Anahata, which is externally manifested as the realization of desires.
“How many days have I eaten nothing?” Thought the yogi. And soon he came across a bush of juicy delicious berries. “To drink now,” was the next thought, and he saw a stream of clear water spouting in the grass. The yogi lay down on the grass under the rays of the morning sun. He looked around and thought: “What a beautiful thick undergrowth.  There must be tigers here. If a tiger will find and eat me. ” Soon a huge tiger emerged from the undergrowth. The yogi could not escape from him. The tiger ate the yoga.
You always be careful with your thoughts. At this level, thoughts have the ability to incarnate!

Hexagram 60 corresponds to the Samadhi chakra

6 Responses to Hexagram 60 Fear of one’s own power