I Ching. Hexagram 61 is named 中孚 (zhōng fú), “Center Returning”.
Other variations include “centering in truth” and “central return”. 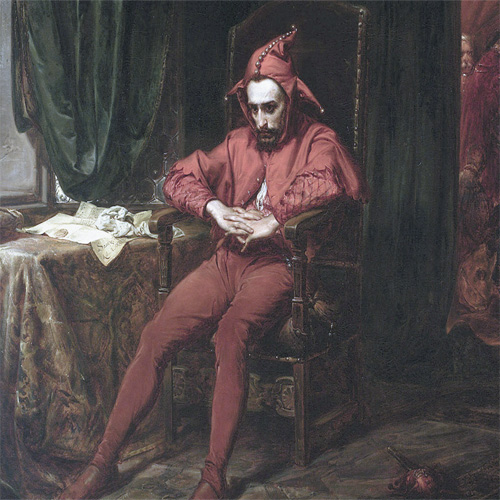 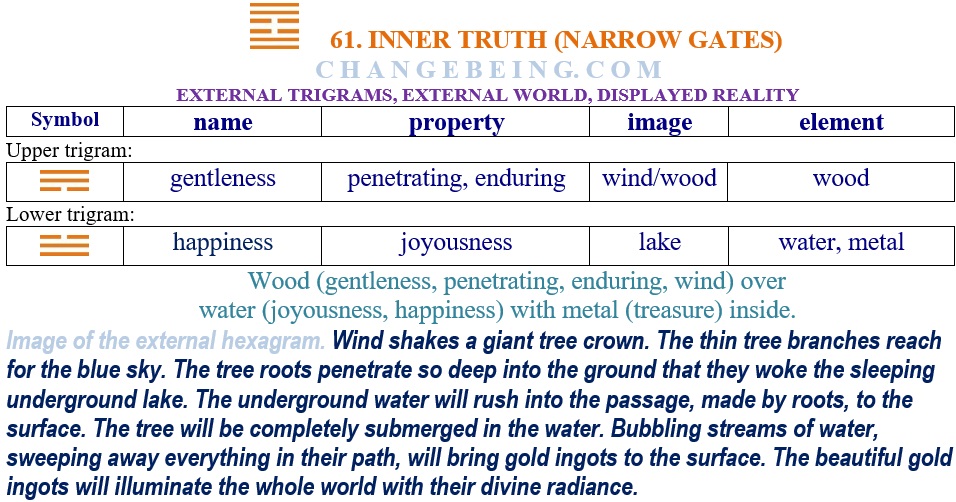 IN THE MANIFESTED REALITY.
Wind shakes a giant tree crown. This is a life rich in various events.
The thin tree branches reach for the blue sky. The tree roots penetrate so deep into the ground that they woke the sleeping underground lake. A series of events leads to a spiritual striving towards Supreme, towards God (heaven). The enduring penetration into the essence of what is happening has allowed to reach the deep layers of reality within oneself.
The underground water will rush into the passage, made by roots, to the surface. Internal information becomes available for awareness.
The tree will be completely submerged in the water. A look at all the events taking place will change drastically. An understanding of the events of reality will now be based on its own deep sense.
Bubbling streams of water, sweeping away everything in their path, will bring gold ingots to the surface. A very valuable treasure hidden earlier in the inner plane will be revealed.
The beautiful gold ingots will illuminate the whole world with their divine radiance. This new state will illuminate the whole world with its beautiful pure vibration.

ON SUBCONSCIOUS PLANE.
A beautiful mountain sprawls freely on the immense plain under the blue sky. A beautiful picture of the world has long been formed. One is felt confident and calm in this concept of the world.
A small seed sprouted in the very heart of the mountain. The seed of change has sprouted in the depths of the subconscious.
The mountain blocks the path to the light. A common, customary and unshakable picture of the world is a powerful obstacle to change.
The tree sprout quickly, like thunder, splits the stone barrier and sprouts to the surface. New changes, destroying the matrix of stereotypes, begin to appear sharply in the world of events.
Now the tree sprout will not stop anything. Once the matrix of stereotypes has been cracked, now nothing can hold back the growth of change.
Soon the whole mountain will disappear under the powerful crown of the tree. Where before there was a calm, solid, unshakable picture of the world, tomorrow everything will drastically change. Reality will become very mobile. Changes will destroy the solid world picture and will bring a lot of emotions.

COMMON INTERPRETATION OF THE HEXAGRAM №61

In the manifested reality. The enduring penetration in the essence of what is happening (wood property) allowed to reach the deep layers of reality inside oneself. A look at all the events will become new, shaped by oneself deep feeling. This INNER TRUTH, through a narrow wicket made by deep penetration by the roots of a tree, rushed out. The INNER TRUTH will completely change the manifested reality. The INNER TRUTH will fill the whole world with divine radiance.

In the subtle world. An unshakeable, calm stay will be abruptly (like a thunder) destroyed by a small germ that has emerged from the depths of the subconscious. Thus, the INNER TRUTH destroys the usual, unshakable picture of the world. If the germ of INNER TRUTH has reached the light through the entire thickness of the oppressive mountain (matrix of stereotypes), it will fill with itself all the subtle reality, the whole subconscious. Now, any events will be evaluated based on INTERNAL TRUTH.

In the field of hexagram 61, an unbiased look at the situation is needed. It is equally bad here: to infringe upon oneself or to infringe upon one’s opponents. It is recommended to truthfully evaluate yourself and other people involved in events. Such an assessment must be made from the highest divine level of the INNER TRUTH. This level is higher than the established customs, above any material profits. The INNER TRUTH is a narrow passage (NARROW GATES) connecting the individual consciousness of a person and his Supreme Self. There is no task more important than keeping the NARROW GATES always open to maintain a strong connection with the Supreme Self. Although it is extremely difficult in specific situations. 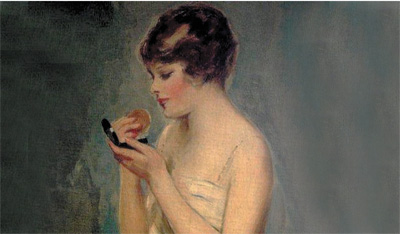 SELF-DECEPTION – an unwillingness to confess to oneself in the true state of affairs;
– choosing, inventing the most comfortable conception of the events and ignoring the facts that destroy this concept;
– unwillingness to comprehend the very essence of what is happening and the adoption of generally accepted views as truth.
SELF-DECEPTION is a typical state for most people, who created an illusory, comfortable world for themselves. The state of INTERNAL TRUTH destroys illusions and destroys SELF-DECEPTION.

A small sprout will blow up
the huge mountain of old tenets.
The winds and storms will calm down,
and then the inner truth will illuminate
the world with its golden shine.

Hexagram 61 corresponds to the Samadhi chakra