Stage 1. The first meeting, getting to know each other, making connections.

As affection deepens, it is accompanied by a powerful process of building channels for subtle energy exchange. Attention is largely focused on the object of love. The energies of the two people swiftly merge and form an energy cocoon. Sensitivity to the lover’s emotions increases dramatically. This is confluence. Lovers do not lose their identities but become tightly coupled through powerful channels of energy exchange.
The stronger their emotions, the faster they turn into an integrated energy system, managed from two centers. At this stage, the energy exchange is ascending. Lovers, sharing their energy of love, are surprised to find it multiplied rather than exhausted.

Stage 2. Enjoying the resonance of love

Lovers send love vibes to each other and, often, to their environment. An external flow of energy storms into their energy system from the outside. This is resonance, the synergy of love when two love impulses compose a love flow that transcends the power of its components exponentially. 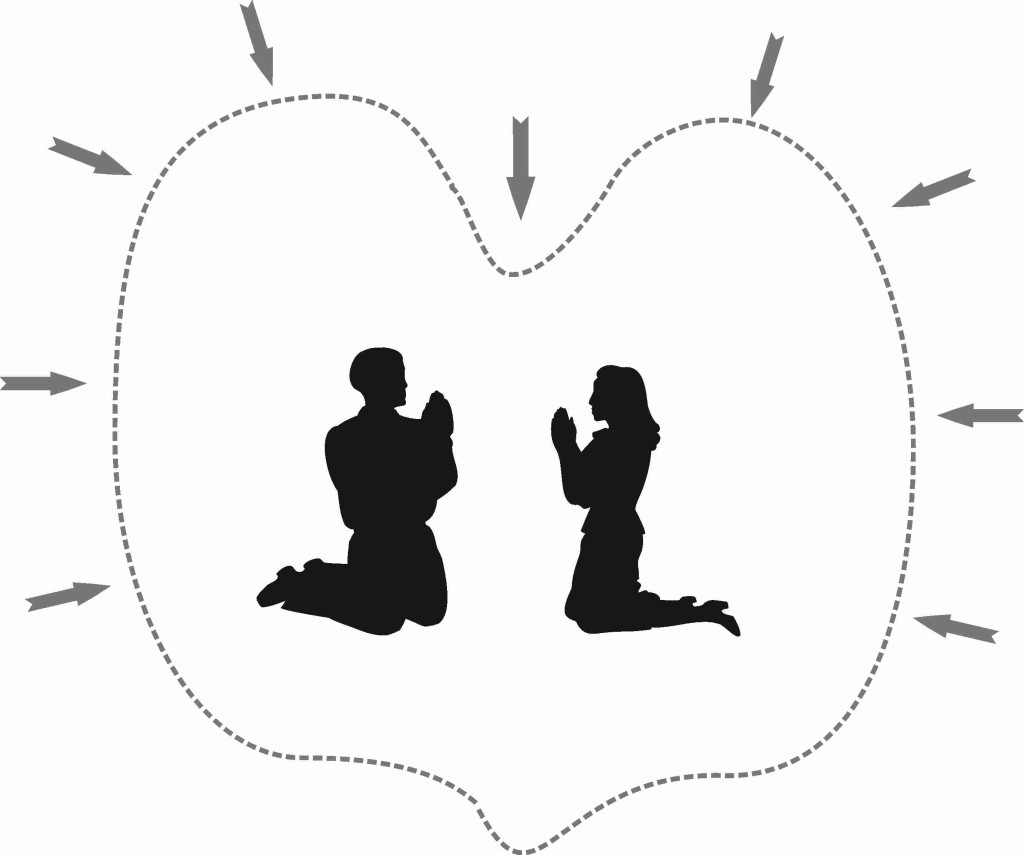 The integrated energy cocoon is finally built at this stage. Your lover’s feelings become as important, as your own emotions. It’s an earthly paradise for the two loving hearts. They would turn into pure love and light and fly away to heaven if they didn’t have any other feelings.
This stage is a triumph of love. The lovers can’t receive more of the subtle energy at this level of their evolution and acceptance.

From the peak of the mountain, all the roads go down, maybe to find a way to a higher mountain. Nothing is permanent in this world, apart from changes. The lovers are afraid to lose their paradise and pay a lot of attention to potential hazards. Energy follows attention and forms the development vector of the situation.
Each other’s weaknesses that used to be ignored, now become visible and powerfully demonstrate themselves through the veil of love.
There is slight anxiety that something can go wrong. Compared to the ecstasy of love, this is a totally different vibration. The heavenly energy, according to the fundamental law of subtle energy exchange, leaves the lovers. 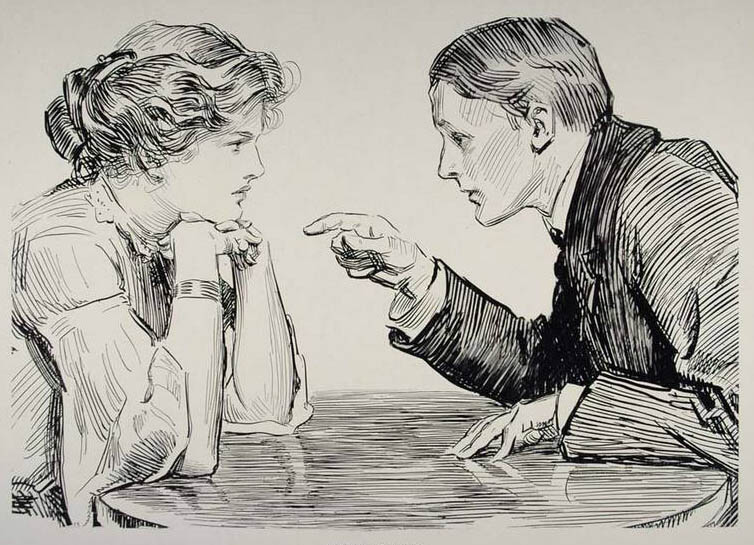 When we communicate, we exchange subtle energy. The fundamental law of subtle energy exchange will help you understand this process.

They feel disappointed and realize that an unending paradise is not possible on Earth.
I would like to highlight that unending bliss and paradise might be possible, but only through the eternal, i.e. God.

The lovers experience physically that there is way less energy in their relationships. 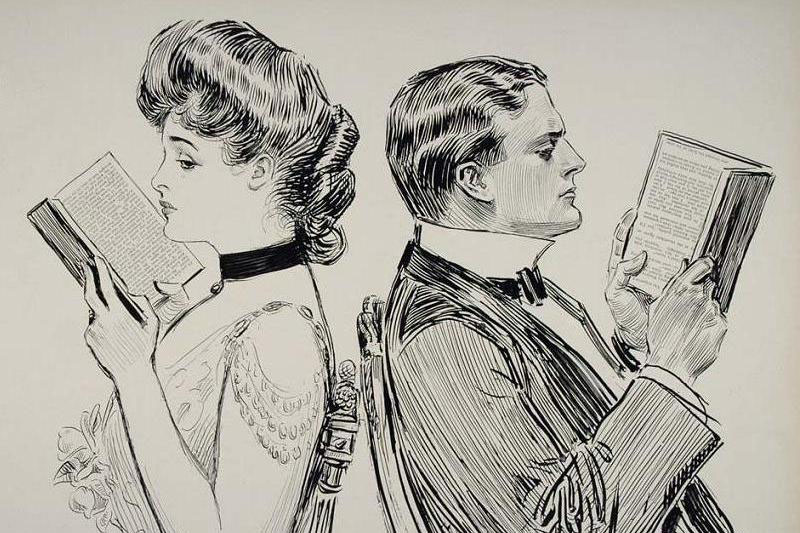 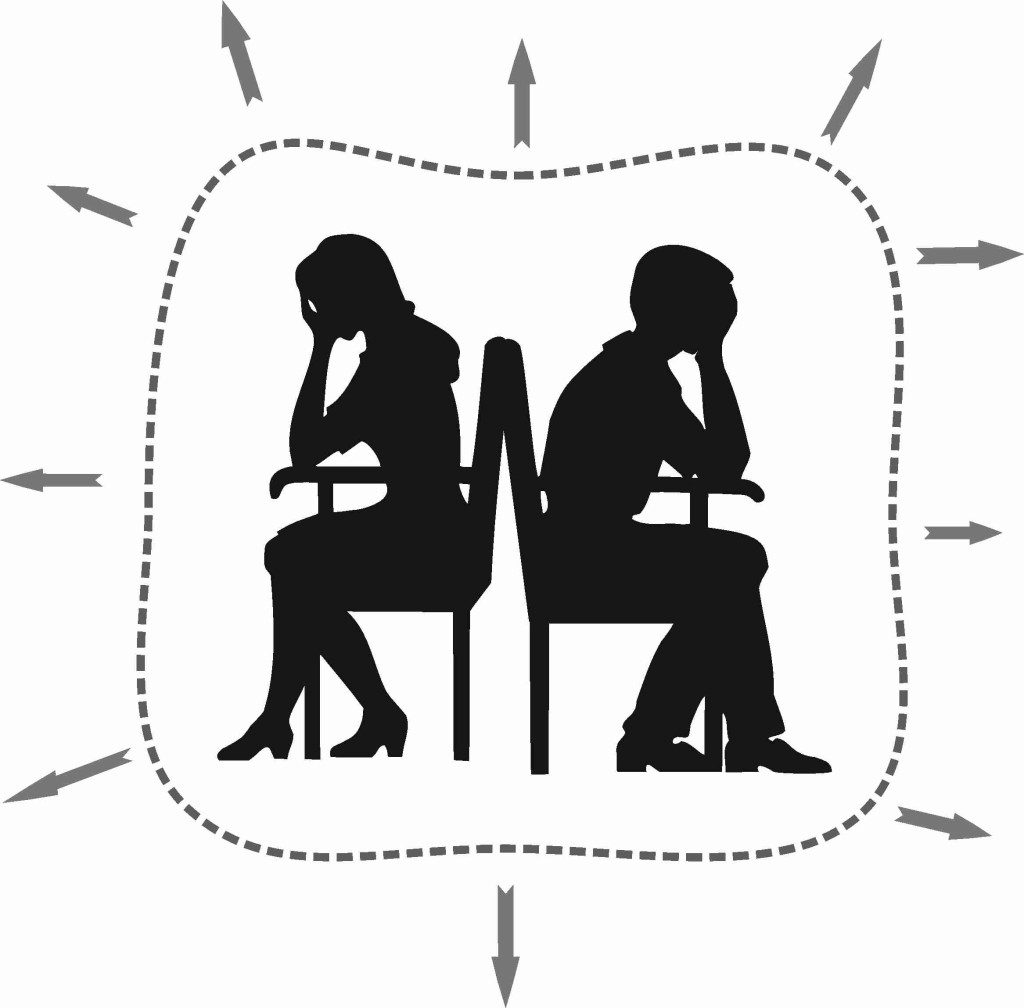 It’s an energy pit, a test.
This is a decision-making point: will they still be a couple? Will they conquer higher peaks of love? Everything depends on how they will react to the inevitable changes.

Stage 5 ( stage 1 of the new level). Climbing a new peak of love

When you hit the bottom of your relationship, but still love each other, there is no other alternative way but to climb up, to the light and happiness. It’s a well-deserved reward for those who are able to see the light in the dark and have faith in love at the times of ordeals.

A new peak is almost always higher than the previous one, as lovers tend to accumulate increasingly more love energy.

So, the circle is closed. Stage 5 is similar to Stage 1, but at a whole new, transformational level.

Let’s consider a specific case of a relationship

They meet at a party. Their mutual interest and affection grow with every dance, every word. He sees her off home. First kisses. 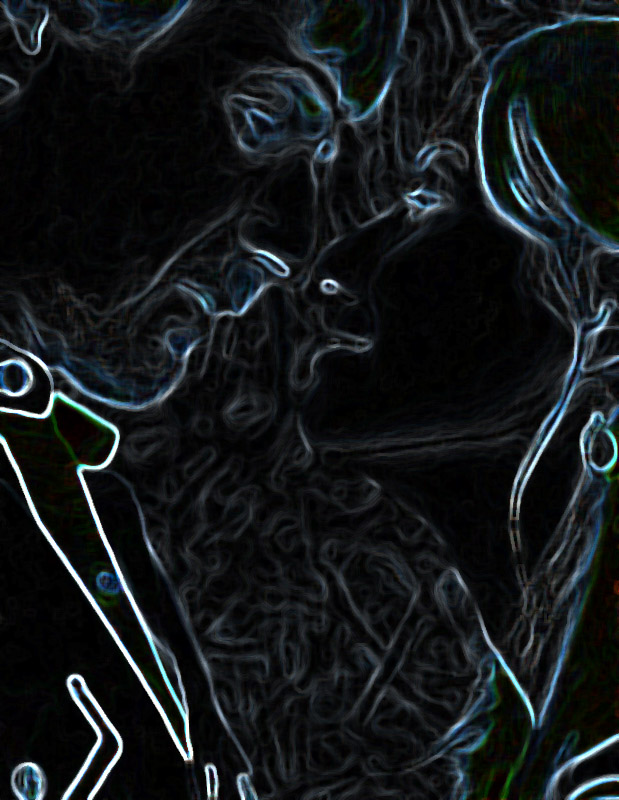 Love euphoria is an ascending pattern of energy exchange. Getting to know each other, when all the thoughts are about the partner. In any company, the lovers spend time with each other, tete-a-tete. The world seems to revolve around the partner.

They are so full of love energy, and happiness, that they can physically experience the integrated vibration of the powerful flow of subtle energy that goes through their bodies. 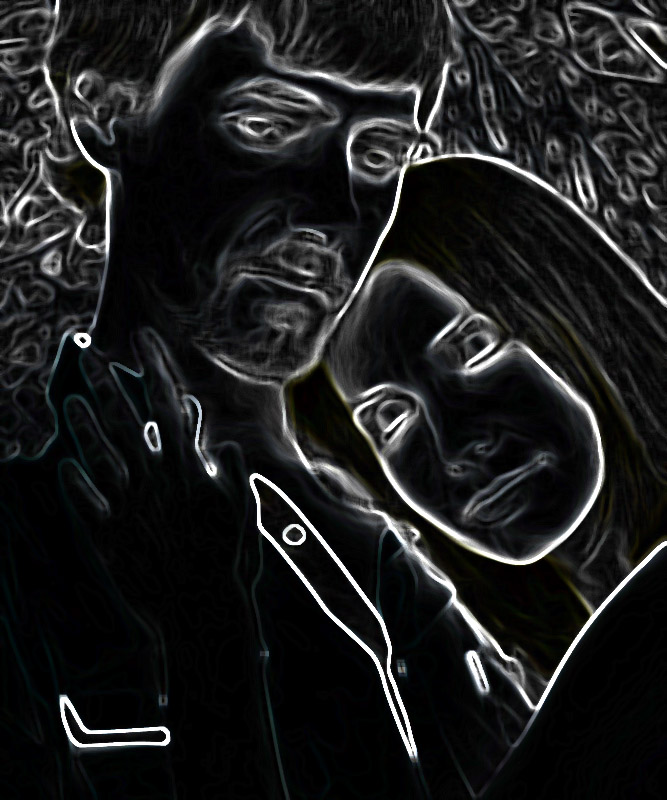 This is the peak of love, the bliss, the earthly heaven. But the unparalleled happiness brings about a fear of losing it.
This is a new stage of their relationship, the performance test.
The man enjoys making jokes, the woman laughs charmingly and appreciates her partner’s sense of humor.
Let’s assume the woman turns out to be more prone to negative feelings, than the man. Her reactions to his jokes change: sometimes she finds them offensive. She takes them personally, loses energy, and feels angry at her partner. The man takes unexplainable delight in making annoying jokes. In such moments, he receives the same amazing subtle energy from the woman that he receives from intimacy. It is especially valuable when their sexual relationships start losing intensity and energy. The man notices that the more annoyed his partner is, the more he enjoys it. The woman loses her vital energy and starts looking for a way to change the situation. This is the crisis point, the moment of truth. 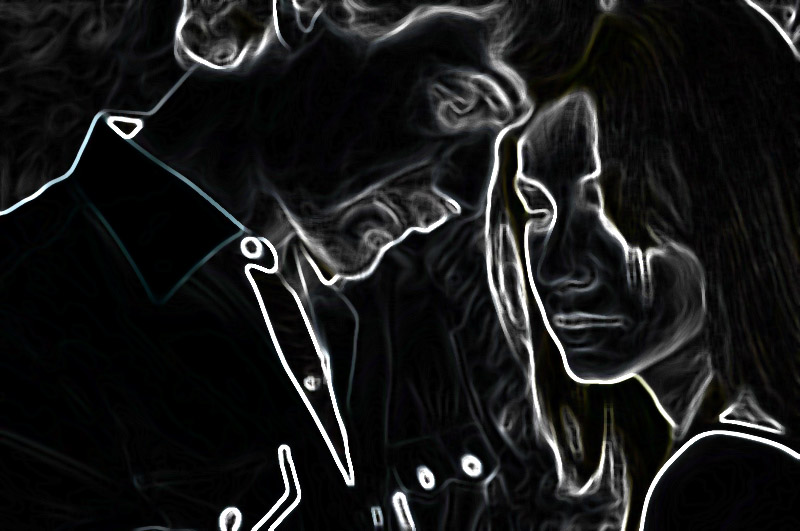 Let’s consider several possible options of the relationship evolution (in real life they are countless).

Option 1. The woman can’t put up with her vital energy leaking away to her partner and starts to look for his pain points.  Undoubtedly, she finds them, for example when they make love. The woman does her best to bring her partner to orgasm as fast as possible, and then enjoys hinting at his man’s weakness.

Of course, he is offended.

The woman wins at this stage: she managed to return more of the subtle energy than she had lost.  The next turn is his. What will he do to hurt her badly and get her love energy? He can leave her, find a mistress, become an alcoholic, a criminal, or fall ill. It depends on his background and inclinations, but mostly on her fears that he will bring into being. Through this process, love generates a powerful descending flow of subtle energy exchange, which blocks the heavenly energy inflow from the outside.

So, paradise can turn into hell very fast. Events can unfold in a countless number of ways in this scenario, from break-up to a criminal case.

She understood the reasons of her energy outflow and found the strength to stop taking his jokes personally. He makes a joke and feels disappointed because she no longer reacts. No attention is paid to the joke. However, he has already tasted the sweets of her hard feelings and is unconsciously trying to hurt her again. Every time his jokes will become more and more evil, and her wounds will be deeper and deeper.  This is a descending flow of subtle energy, which ruins souls and hearts.

Events can unfold in different, mostly, negative ways. However, if the man pays attention to his woman’s feelings and realizes how much he hurts her, he will stop making evil jokes. Then an ascending energy flow will appear and the couple can reach new amazing peaks of love.

She found the strength to stop taking his jokes personally. He has always realized how much his jokes hurt her, but, for some unexplainable reason, he still made them.

He feels that his jokes no longer give him the vibe and stops making annoying jokes. After all, there are other ways to get the energy of love from her, for example, by giving heartfelt compliments. This is the ascending pattern of energy exchange. It attracts the inflow of heavenly energy from the outside, helps them to overcome the energy crisis, and opens the way to new peaks of love!

Suppose, the couple has overcome the relationship crisis and is now conquering a new peak of happiness. They have gained a successful experience of getting out of energy pits and following ordeals will be easier to go through.

In other words, if they have overcome the first crisis, they are likely to overcome the next ones as well. However, in real life, very few couples can preserve a relationship for a long time.

The reason lies in such a long-term factor, as different paces of spiritual development. Spiritual progress is the ability to accumulate more and more love energy. Different paces of spiritual growth in the long run end in fundamentally different energy levels. The one with a lower energy level faces an irresistible temptation to get the subtle energy from the partner through the descending pattern because he finds it increasingly difficult to inspire a sincere admiration.

We can’t live without love, without a boost of subtle energy from the partner. That is why in most cases the partner with a lower energy level will tend to get love through his lover’s negative emotions.

There are many options from untidiness and sloppiness to burdensome addictions or illnesses. The higher-level partner, to stop his lover from degradation, will either have to degrade too, keep distance from him or help him catch up.

Is it at all possible to non-formally hold long-term relationships in a couple?

The answer is yes.

First of all, if both partners have the same pace of spiritual growth, they will not have a dramatic difference in the subtle energy levels in the course of time.

Therefore, to be happy together in the long run, you have to pay as much attention to your partner’s spiritual growth, as to your own one. 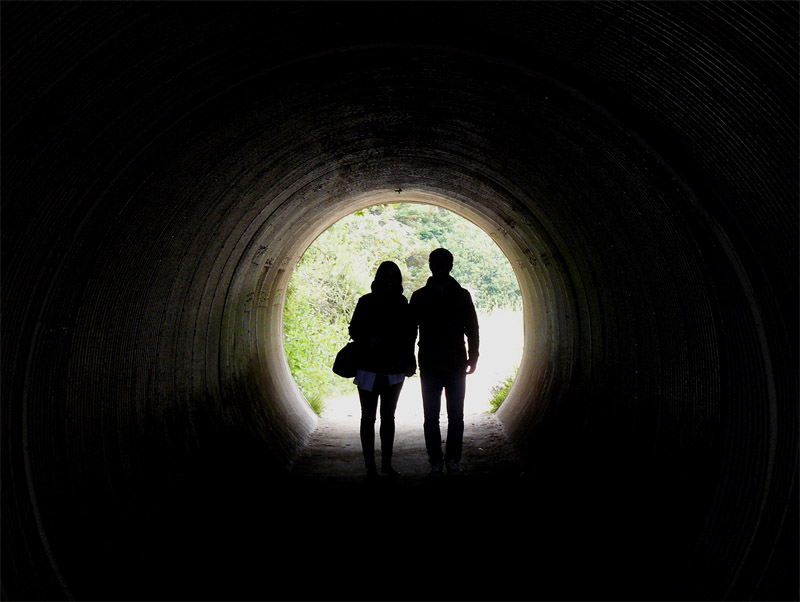 And what is more, there is an extremely powerful factor, which strengthens relationships and helps to overcome energy crises. This is the outer energy field of God’s love.

If both partners find support in the outer energy field of God’s love, not on their partner’s field, this couple will always be safe. 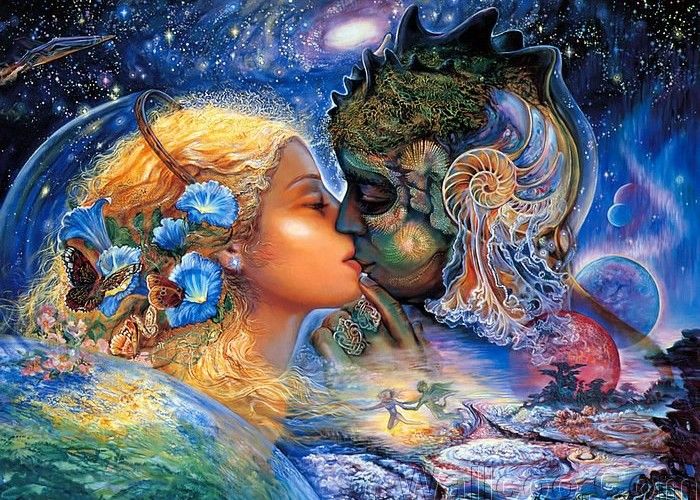 Moreover, apparently, they are unlikely to face severe crises or energy pits on their way. This is a universal idea, which can be applied to any kind of relationship.

“God is the only reliable support”, Sathya Sai Baba

Besides, according to the law of subtle energy exchange, being in God means basically being in resonance with His love energy field at any life circumstances. It’s not a state of mind, but rather feelings of joy, happiness, and unconditional love for all with no exclusions.