BASIC PRINCIPLES OF ANALYSIS OF HEXAGRAMS OF THE BOOK OF CHANGE

According to legend, the Chinese emperor Fu Xi (who lived in the 28-27 centuries BC) once saw a huge turtle swim out of the Yellow River. On her carapace were signed consisting of three lines (trigrams). The lines were solid (Yang energy) or discontinuous (Yin energy). It was revealed to the Emperor that the entire system of the universe was encoded in these signs. The trigrams were given names. Each trigram is assigned a primary element. The order of the trigrams shown in Table 1 is named after the creator of Fu Xi.

Five primary elements, according to the Chinese philosophical theory Wu-Hsing, are the constituent parts of everything in the Universe. These are metal, earth, wood, water, fire. The primary elements should be considered in the most generalized form. Each primary element is, first of all, an energetic vibration, the properties of which are associated with the corresponding substance.

Diagram № 1 below shows the relationship between generation and destruction between the primary elements. These are the most striking, resonant relations and they are sufficient for considering most practical problems, therefore this scheme is the most common. 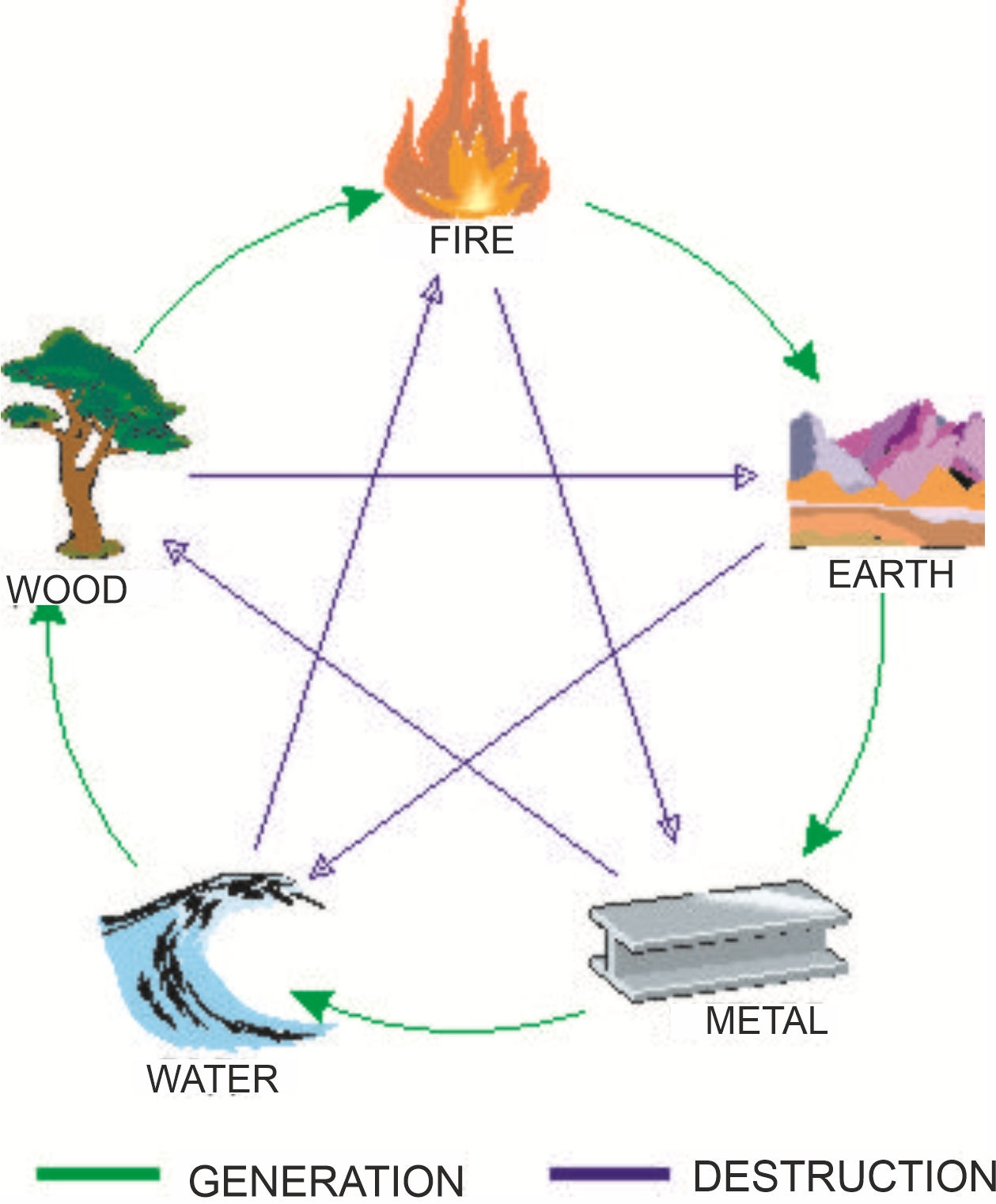 However, scheme No. 1 does not take into account a number of important aspects of the interaction of primary elements and therefore should be supplemented. The following well-known scheme No. 2 is supplemented with depletion relations. It allows you to look at the situation more broadly and therefore is more multidimensional. 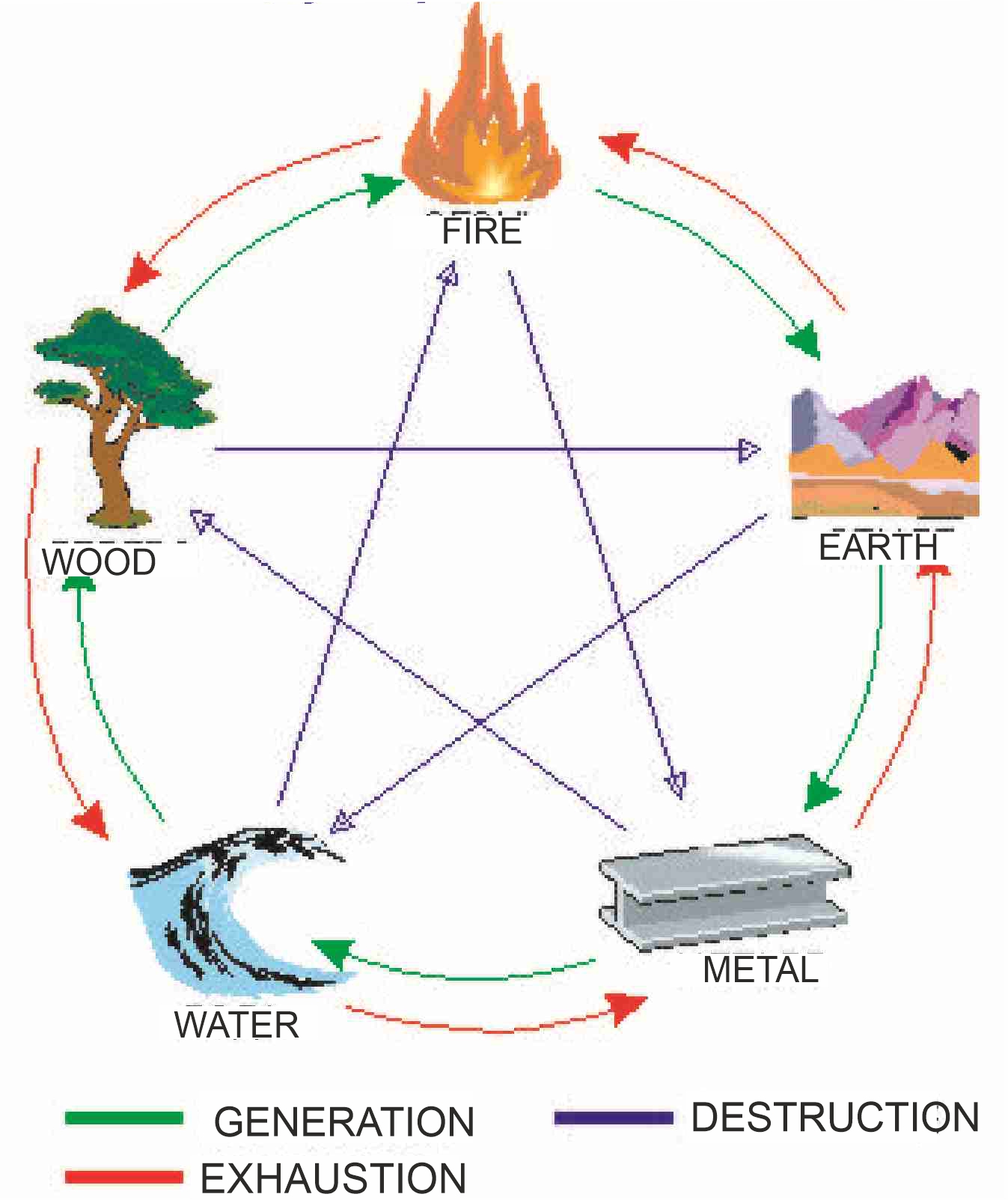 Even augmented by new relationships, diagram # 2 does not fully describe reality. For example, water destroys (extinguishes) fire, but fire does not affect water in any way. In reality, fire converts water to steam. The reality is that everything affects everything. Therefore, the complete scheme No. 3, which takes into account all aspects of the relationship, looks like this: 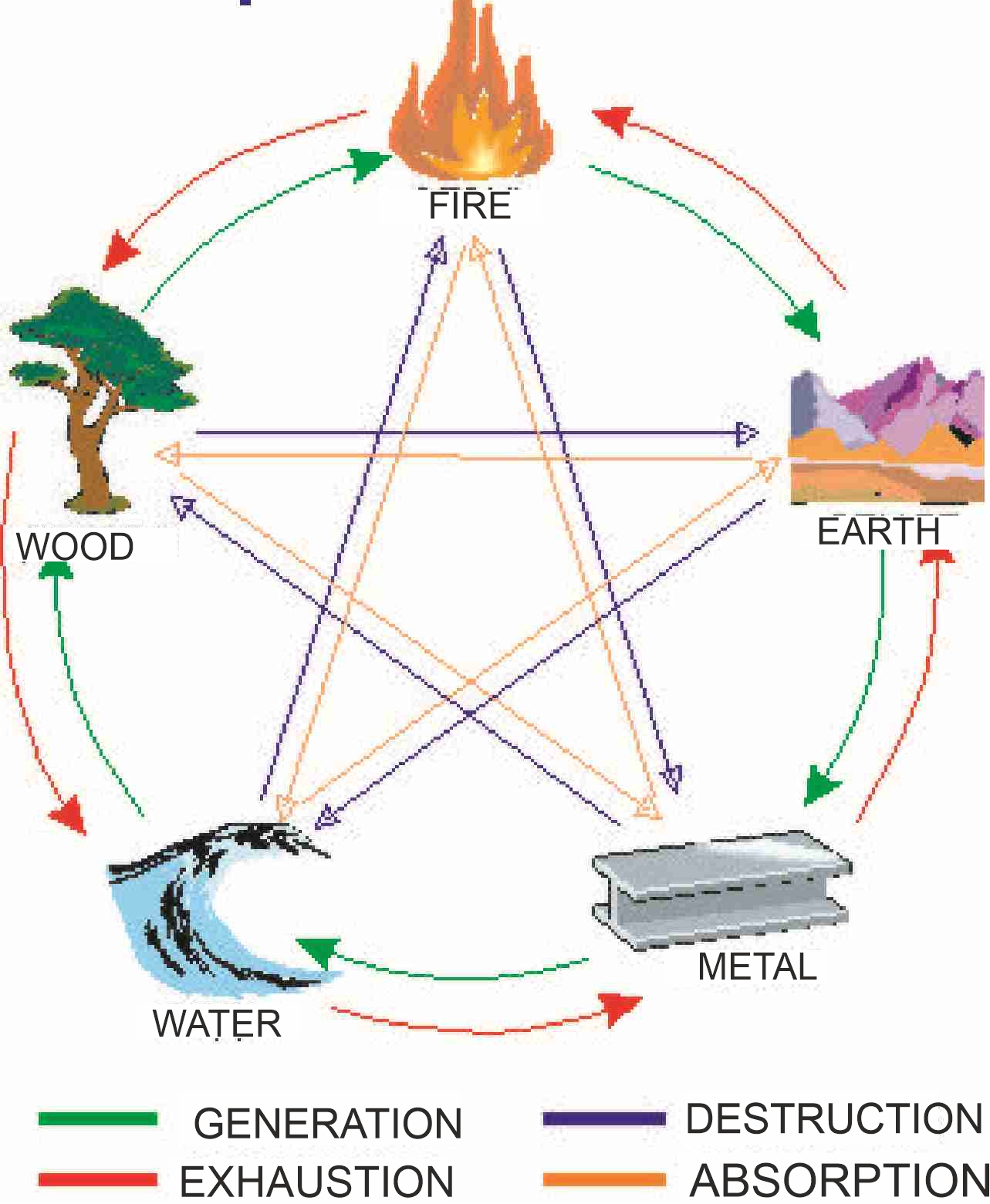 Let us briefly describe the introduced relations of primary elements. The earth absorbs the tree, that is, when the tree dies, it turns into earth. A growing forest can absorb (hide) metal released to the surface from the bowels of the earth. Metal objects allow you to absorb (convert fire to heat) fire. Fire can absorb (evaporate) water. Absorption occurs as a result of the clear predominance of one element over the other:

For a fire to evaporate water, it must be a powerful flame and a small amount of water.

Large metal will consume small fire. If you put a massive piece of metal in a small fire, it will take away all the heat and the fire will go out.

The earth will absorb the tree only when the tree weakens and falls.

Wood will absorb metal if it is lush thickets, and the metal barely appeared on the surface.

Only if there is much more water than the earth, then it will wash away and swallow up the earth.

It may seem that the last scheme has no practical value, it has degenerated. There are no priorities for relationships in it: everything just affects everything. What is the point then in drawing multi-colored arrows? The characteristics of relations remained, and they are the essence of the interaction of the five primary elements. In this work, the latter scheme will be used as the most complete and multidimensional one.

Wen-wang (the king – the ancestor of the Zhou dynasty, who lived in the 12th century BC) arranged the trigrams one above the other in such a way that hexagrams consisting of six lines were obtained. Eight trigrams formed (8×8 = 64) 64 hexagrams. 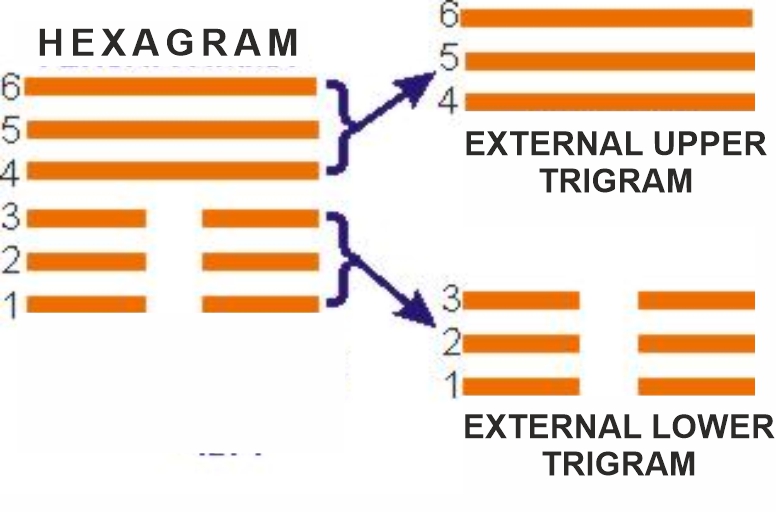 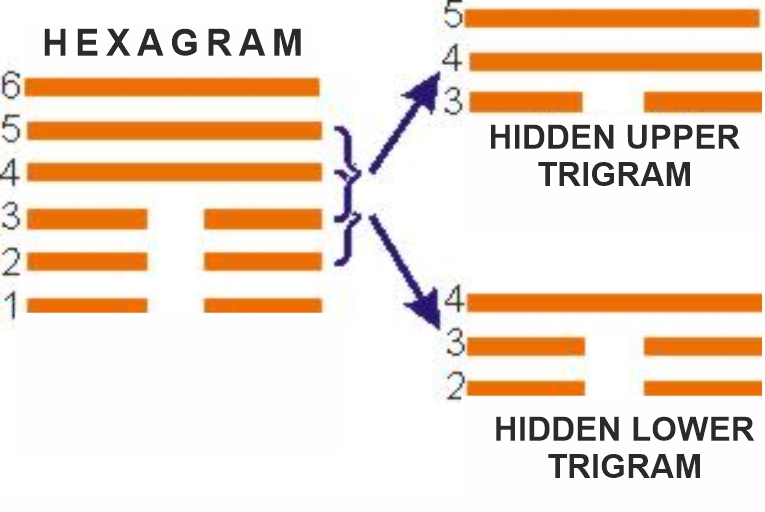 Each hexagram describes the situation on two levels: external and internal (subconscious) through the interaction of the corresponding trigrams. Trigrams interact with each other according to their properties (see table 1) and their primary elements. Moreover, the lower trigram determines the likely course of events, and the upper one characterizes the outgoing situation.

In this case, the outer pair of trigrams describes the manifested events, and the hidden one – the situation on the subconscious.

Thus, each hexagram contains a whole world, including complex, ambiguous and contradictory relationships.
It is impossible to express in a few words this whole complex of relationships. The vibration of the hexagram is primary, and its name reflects only a certain facet of this vibration.